Spokane City Council’s last meeting of the year was a marathon session that lasted over four hours and brought out the largest group of people the city’s legislative body had seen all year.

The council's agenda touched on a beautification project, a pilot program meant to deter speeders in school zones and an ordinance intended to use the city’s economic clout to boost the number of skilled workers in the area.

It was this ordinance, accompanied by two others meant to steer city procurements and contracts to local businesses, that filled council chambers with people who largely urged its passage.

The ordinance mandated that 15 percent of all labor hours on city public work projects be done by apprentice labor. Spearheaded by City Council President Ben Stuckart, the ordinance is meant to address the shortage of skilled labor contractors are facing in the Spokane area and across the state. Speaking before the crowded council chambers, Stuckart said that the shortage will worsen as construction projects pick up significantly in coming years. 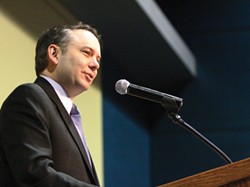 “We, as a participant in the market, have to do something,” said Stuckart, who pointed to about a dozen other schools or government entities in Washington that have similar requirements. He also mentioned a slew of multi-million dollar projects the city had planned in coming years, which, under the ordinance, could be used as an incubator for new skilled workers.

The ordinance, starting July of next year, will require 5 percent of all labor hours on all city projects to be done by apprentices, who will get on-the-job training for in-demand professions. That requirement would steadily rise to 15 percent by 2017. The ordinance allows these requirements to be waived under some circumstances, but contractors who don’t meet it could face fines.

Stuckart said that in drafting the ordinance he made multiple modifications to address the concerns of contractors, to no avail. Several contractors showed up to testify that the measure was too punitive and imposed unrealistic requirements on an industry still struggling to recover from the Great Recession.

“For our organization, it will not work,” an owner of a small construction company solemnly told the council.

But the majority of the nearly 40 people who testified were in support of the ordinance and included many individuals from the Spokane Alliance, a coalition of religious and labor groups focused on economic issues. A parade of current and past apprentices came before the council to tell stories of how apprenticeship programs gave them second opportunities after plans of college didn't work out.

“Again, I ask, why is OK to make this mandatory?” he asked. “Why is this OK to attach a penalty?”

Although the ordinance passed 5-2, Spokane Mayor David Condon has concerns about it as well. In a letter to Stuckart, he wrote that the ordinance should be reworked to better take into account the concerns of all stakeholders and to broaden its focus to creating more family-wage jobs in the area.

In addition to passing the apprenticeship ordinance, the council also voted to shuffle money from existing funds and direct them toward the $800,000 revitalization of the Division Street Gateway, a heavily used entry point to the city that sees 28,000 pass through it each day. Although Fagan questioned if it was a good use of funds and George McGrath, who spoke against nearly everything the council did during each public comment period, called it a “hair-brained scheme to make Spokane's entry way beautiful on Division Street,” the measure passed.

Additionally, the council voted to set up a pilot program meant to deter speeding at Finch and Longfellow elementary schools. Sponsored by Councilman Jon Snyder, the measure, beginning next year, will set up speed zone cameras that will take a picture of speeding drivers and send them a ticket in the mail.