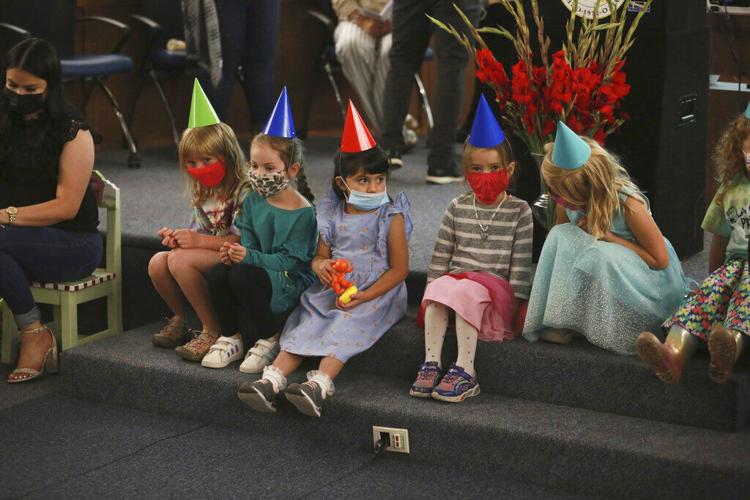 In this July 2021 photo, children wait for Gov. Michelle Lujan Grisham to make an announcement about child care subsidies in Santa Fe, New Mexico. That state, like Washington and others, provided millions in federal pandemic relief funds to childcare providers to help them pay for everything from labor costs to rent. The Spokane Alliance is now seeking to have the county in Eastern Washington invest more federal dollars into local programs as a stabilizing measure.

The Spokane Alliance has mounted a campaign to get the county to invest $10 million or more in American Rescue Plan funds into childcare, early learning programs.

A handful of members from the nonprofit alliance of unions, student and civic groups asked Spokane County Commissioners Mary Kuney, Josh Kerns and Al French this week to make that investment. At the least, these members said the elected body should match the combined $4 million contributed by the cities of Spokane and Spokane Valley.

“It’s an investment into Spokane County that will have an incredibly high rate of return,” said Tamar Malino, rabbi of Beth Shalom Temple in Spokane, at Tuesday meeting.

Although long-term, sustainable funding solutions for child services are needed, Alliance members urged the county to take immediate action to provide short-term relief for the industry.

Officials were told that 13 childcare facilities had closed down in Spokane since the start of the COVID-19 pandemic in early 2020, and many were struggling to remain open.

A report recently released by Washington STEM, a Seattle-based nonprofit that focuses on education issues, shows that early childcare was already struggling throughout the state prior to the pandemic, which exacerbated the problem. Although there were about 314,000 children under the age of five who had parents in the workforce in 2019, there were only 154,380 licenses childcare spots available for that age group.

The pandemic brought the loss of at least 712 licensed childcare programs, reducing capacity by 29,290 children, according to Child Care Aware, a nonprofit that works with providers throughout Washington.

The closures were based on a combination of factors. Early in the pandemic, childcare facilities had difficulty obtaining cleaning supplies and toilet paper, among other products. Social distancing created another problem for providers to deal with even though Gov. Jay Inslee allowed childcare centers to remain open.

After K-12 schools closed and many parents lost jobs or began working from home, enrollment went down at childcare facilities. That left centers to deal with rent, mortgage and utility obligations without a steady income to cover the bills. The state provided financial assistance to childcare providers during the pandemic, but that was not enough help to keep many doors open, says Child Care Aware.

The demand for limited spots in childcare facilities has left families to compete in an open market, which has driven up prices. Many families now spend 41% of their monthly household income on these services, according to the group’s report.

Without some type of intervention, Spokane Alliance members told the county that local childcare centers risked being understaffed and employees overworked. Without affordable services, many parents were prevented from entering the workforce, which adversely affected their households as well as the local economy, they said.

There are additional concerns about children who need some supervision.

“Mental health needs in children have skyrocketed since the pandemic,” said Malino.

Commissioner Al French told Spokane Alliance members at the Aug. 16 meeting that county officials were looking at several available funding pots to help childcare providers. He said those options might make use of ARP funds unnecessary.

“I don’t want you to feel like your request is not being heard, not being considered,” he said. “We’re just trying to find the best path forward to maximize the amount of money that is available to us.”