Small business owners, medical professionals, non-profits, community groups and city council members gathered in a packed Saranac Commons on Tuesday to unveil a sick, safe and family leave policy for the City of Spokane. The Spokane Alliance, a coalition of groups in Spokane County, has been conducting outreach and analysis for nearly two years with positive results: nearly two dozen small businesses already endorse the draft policy, city council has announced their intention to pass a policy by summer, and hundreds of stories have been collected that speak to the profound impact of employees having access to paid sick, safe and family leave. 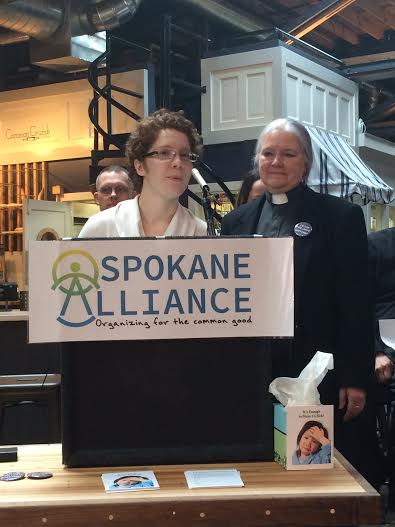 Madeline Cells, a counselor at Logan Elementary School and one of the speakers at the media conference, sees the impact every day. One of her students has missed 24 days of school this year. His parents work low wage jobs that lack access to paid sick or family leave. Taking a day or two of unpaid leave could mean the difference between paying all of their bills or sinking further in to poverty. To make up for what they lack in employee benefits, their oldest child stays home with the younger siblings when they are sick. Chronic absence at school is strongly correlated with lower grades, and poorer educational outcomes.

Any one who has worked a low wage, no-benefit job could share dozens of stories just like this. Working as a Swing Manager at McDonalds, it was almost a daily occurrance to have employees show up sick. I can remember puking in garbage cans, then making breakfast sandwiches for customers in the drive thru. At one point, I came down with a vicious sinus infection. I would cough so hard that I puked phlegm. Due to the low wages and lack of benefits, I could not afford to miss work; and trying to arrange a last minute shift swap with a pool of only five managers was a herculean task that rarely worked as advertised. By the time I was able to see a doctor, they told me I was lucky not to have ended up in the emergency room. The infection was spreading. Had I waited longer, long term complications were a very real possibility. To anyone who hasn’t had to worry about how they were going to pay the rent, this kind of behavior seems irrational, but when you’re living in that moment, you see how few options you truly have.

If you’re not loving the image of your Big-Mac coming with a side of norovirus or flu, you aren’t alone. At the conference, a local physician, spoke about the medical need for paid sick and family leave policies: the spread of contagious diseases is made that much easier when employees who handle food, clean hotel rooms or sort clothes at the nearest retail outlet show up sick. Working while sick, also known as presenteeism, is estimated to cost our country $180 billion every year. The costs are a combination of decreases in worker productivity and morale, and health care costs that could have been avoided had employees been able to stay home and not infect others.

While around 60 percent of private employers already offer paid sick or family leave, that still means four out of every 10 employees in the workforce lacks access. In Spokane, that translates to roughly 40,000 employees in the civilian workforce who don’t have access to paid sick, safe or family leave. These employees are more likely to be poor and people of color, living in communities that lack the same resources as middle class suburbs. To the Spokane Alliance, that’s what this policy is meant to address: the large gap in access left by employers who chose not offer these benefits. So long as that gap exists, our community suffers.